I've been contributing freelance editorial work to Total Film since 2009. During that time, I've pitched and sold various features based on interviews with directors, actors and writers. Below, you'll find a selection of my published work.

Anchorman: The Legend of Ron Burgundy is kind of a big deal in the comedy world - but the deeply rooted love and adoration for Director Adam McKay and star Will Ferrell's comic creation certainly didn't appear overnight. To celebrate the film's 15th birthday, I spoke with McKay to get the lowdown on the birth - and unlikely cult legacy - of Burgundy. 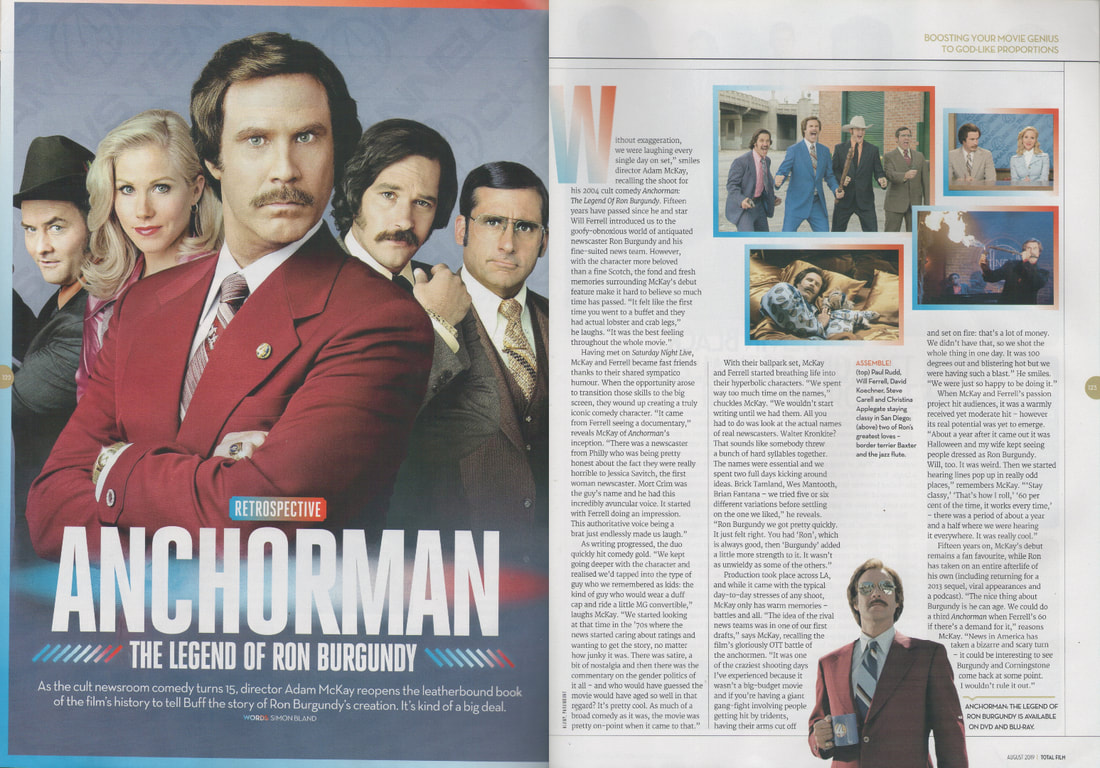 American Pie reinvigorated the raunchy teen comedy genre. When it turned 20 in 2019, I reunited its Directors Paul and Chris Weitz and stars Seann William Scott and Shannon Elizabeth to discuss the impact and unlikely longevity of this key 90s comedy. 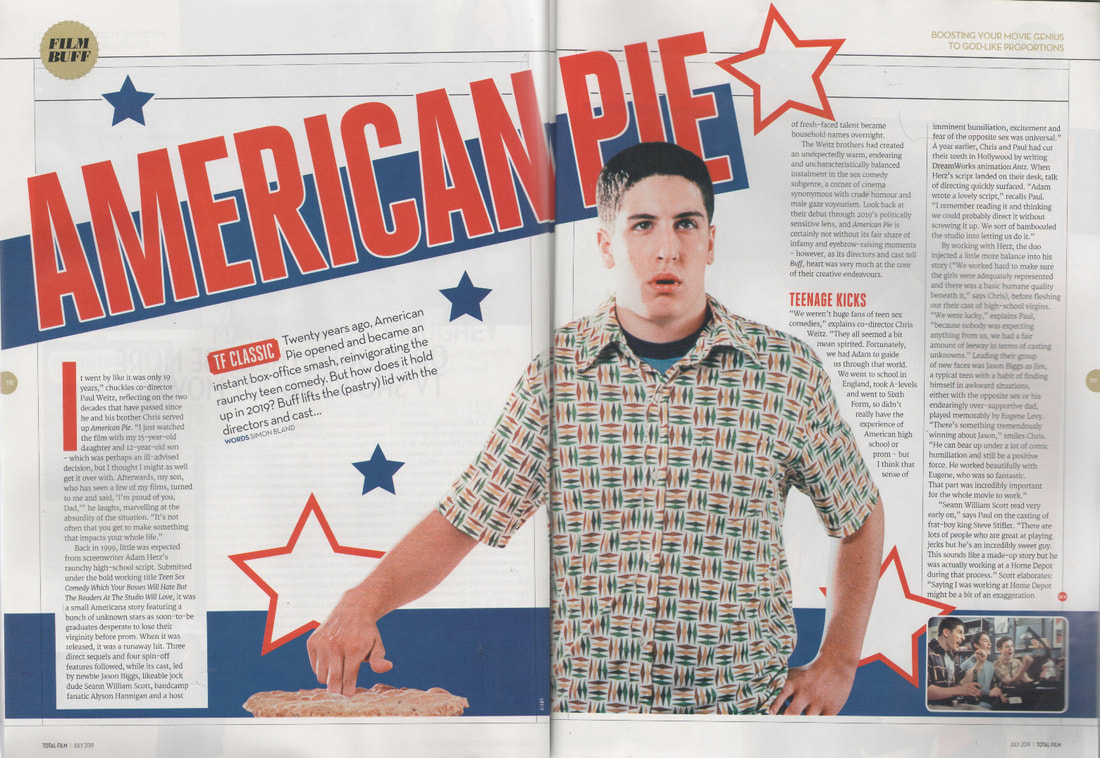 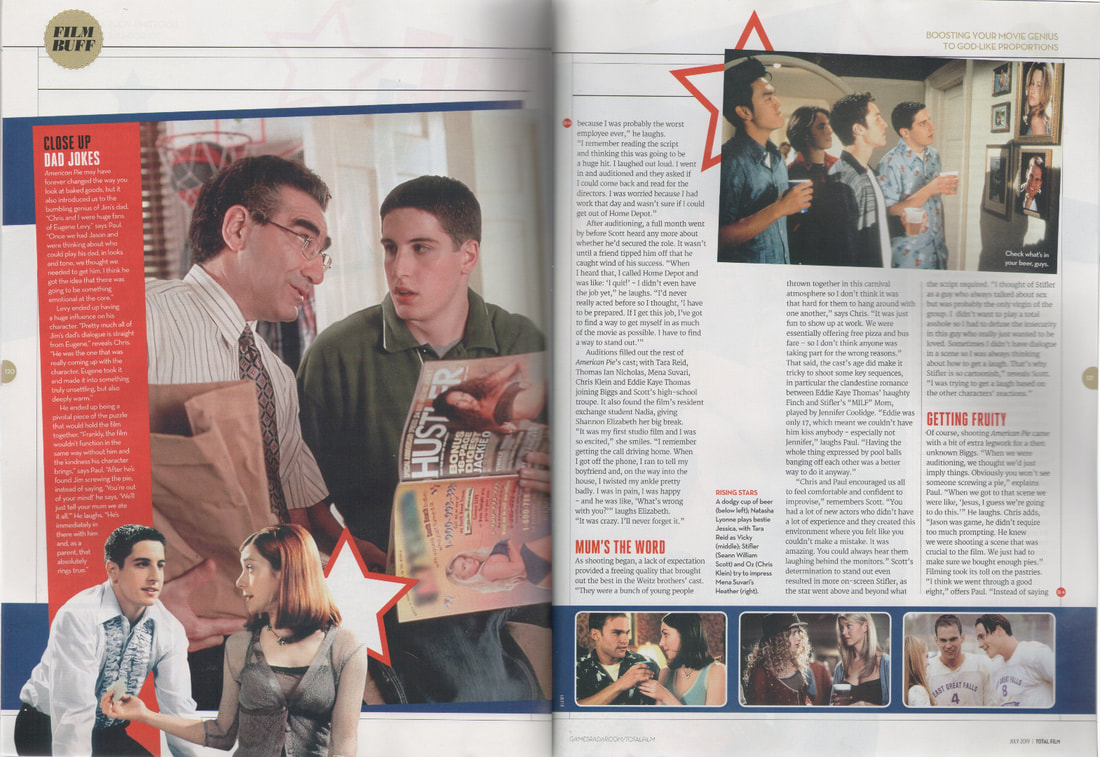 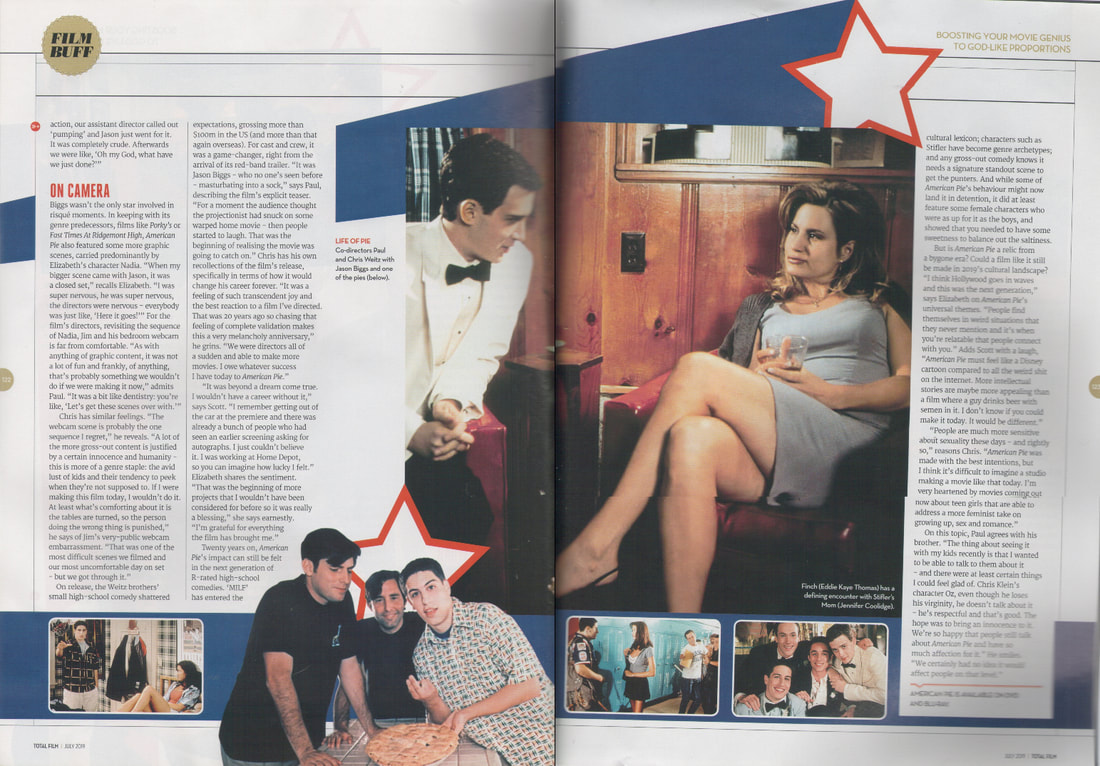 I first spoke with Frank Oz for SFX, where we discussed his debut documentary feature Muppet Guys Talking. However when I realised that 2019 marked the 20th anniversary of his hilarious Hollywood farce Bowfinger, I couldn't miss the opportunity to talk to him again to get his thoughts on this classic comedy, two decades on. 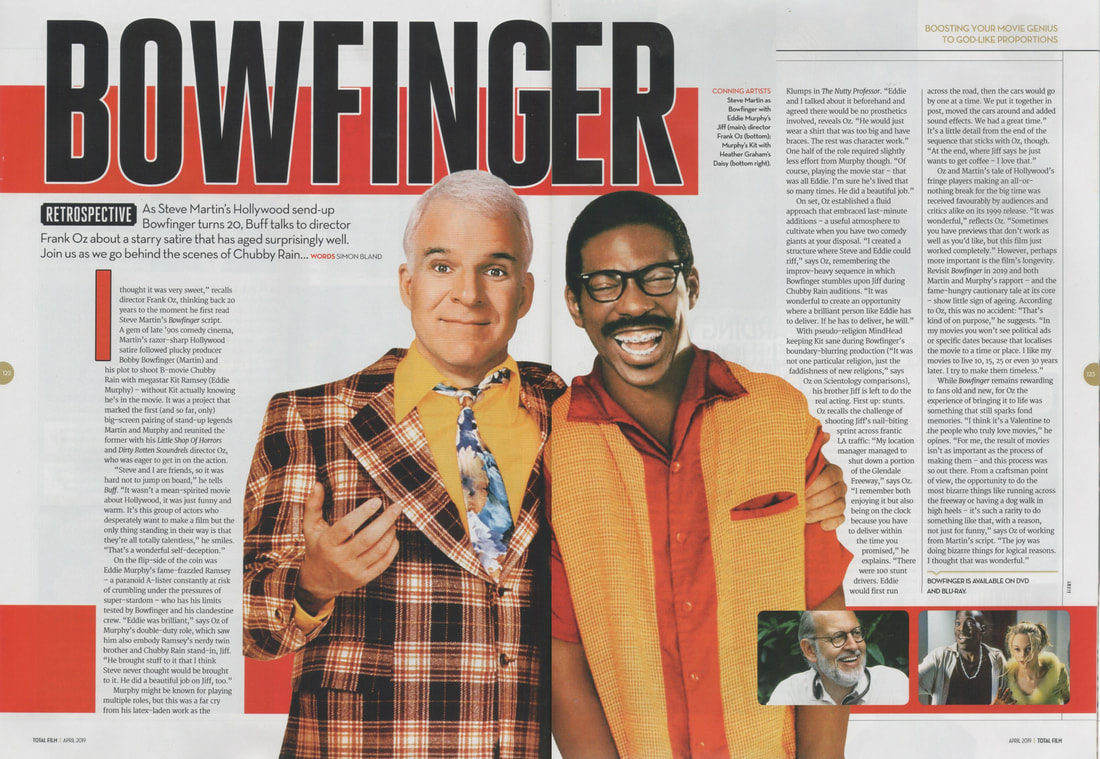 I spoke with Bill Bailey in early 2018 for The Big Issue North - but it was great talking to him again, this time to find out his all-time favourite movies for Total Film. 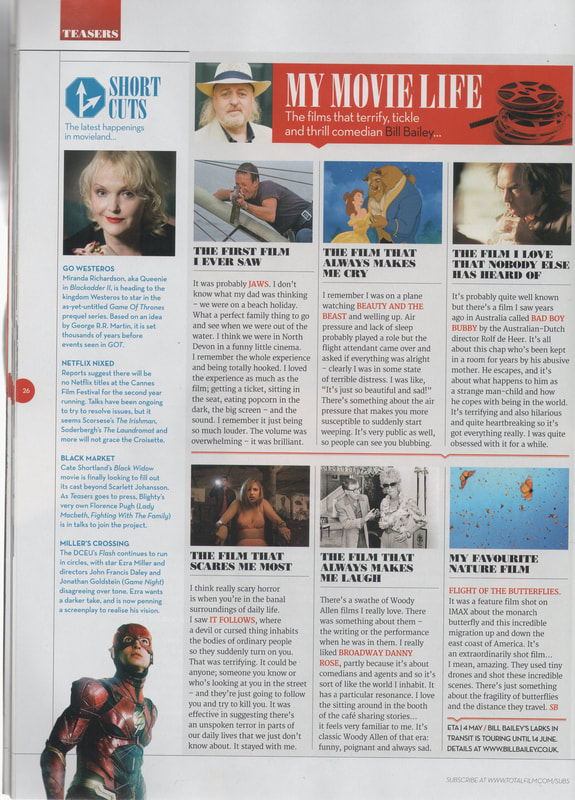 Film Buff: The Nightmare Before Christmas

Part one of my double-celebration of The Nightmare Before Christmas at 25 involved chatting to the film's Director and stop-motion master Henry Selick about embarking on the mammoth task of bringing Tim Burton's dual-seasonal tale to life... 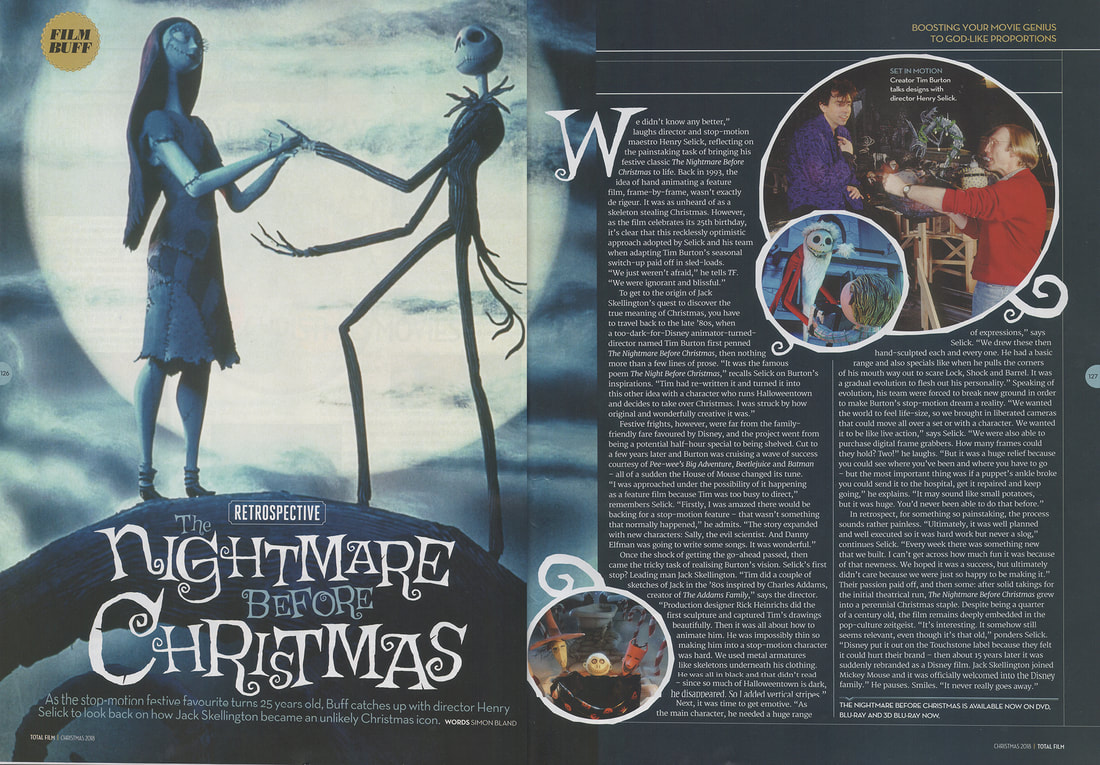 Well, this one was pretty special - it's only flippin' Mike Myers! Hot off his appearance in Freddie Mercury biopic Bohemian Rhapsody, I spoke with Mike about his zeitgeist classic Austin Powers: International Man of Mystery on its 21st birthday. 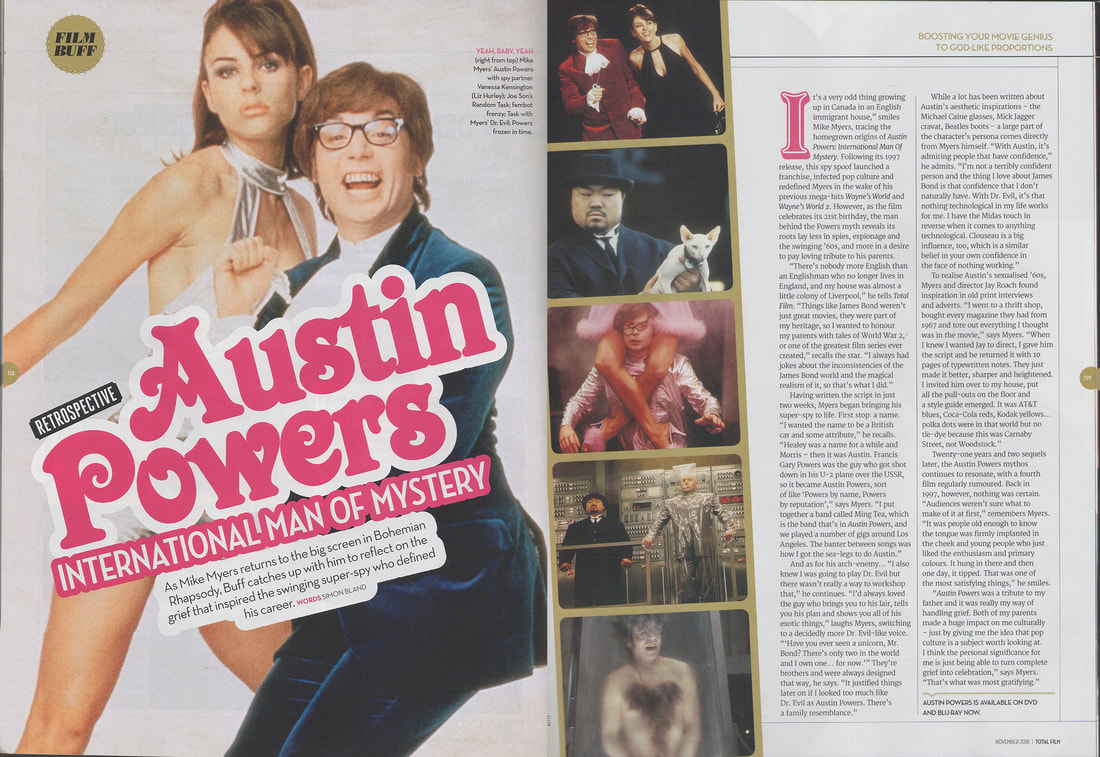 Professor Brian Cox's logistical mind struggled to think of a film that made him cry but he had no shortage of sci-fi flavoured answers to all my other movie questions. 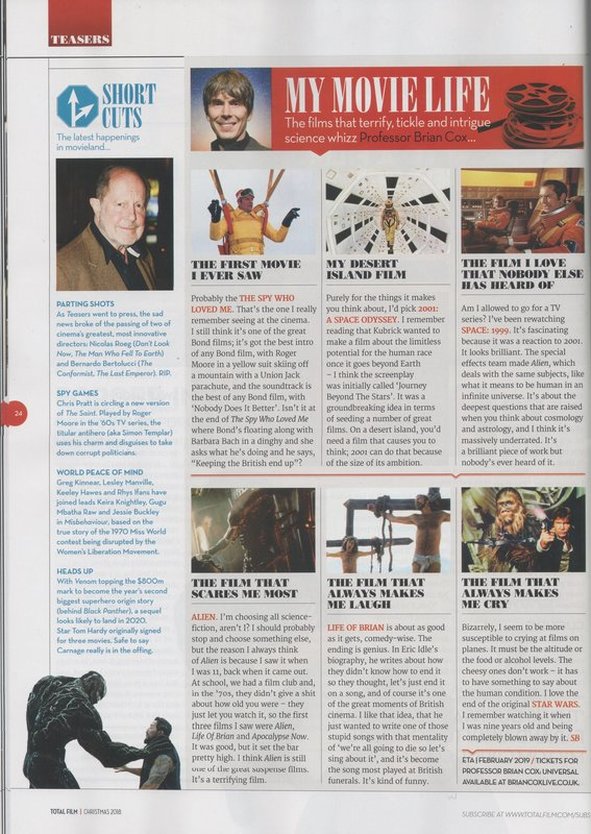 Saturday Night Live's Bill Hader recently stormed the Emmy's with his ace new hitman comedy Barry. I caught up with Bill shortly before the show's UK debut to talk movies. 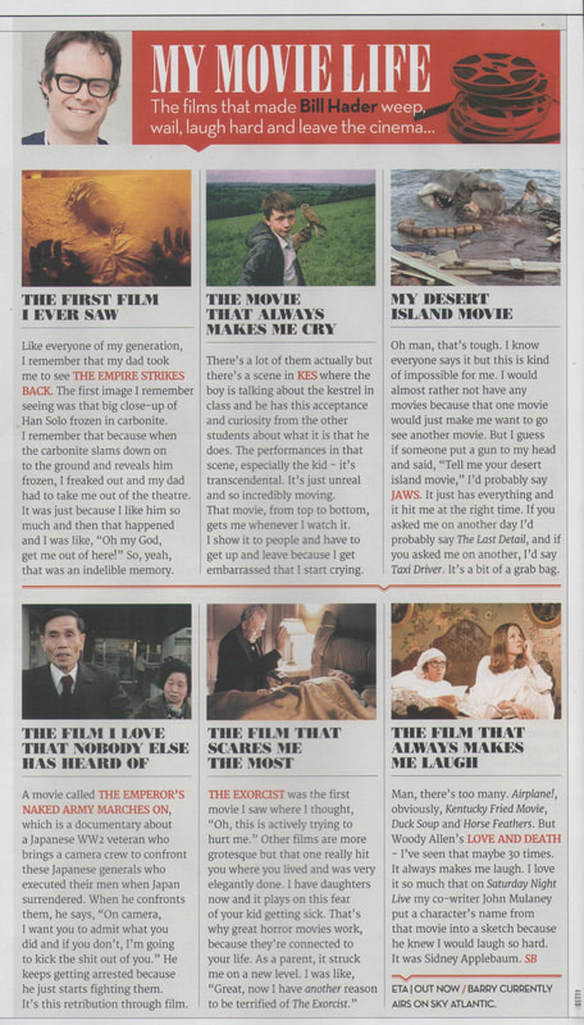 Director Jeff Wadlow had the tricky job of following up surprise Blumhouse hit Get Out with a deadly game of Truth or Dare. I spoke to him shortly before the film's theatrical release about how he went about upping the ante on this party game fave... 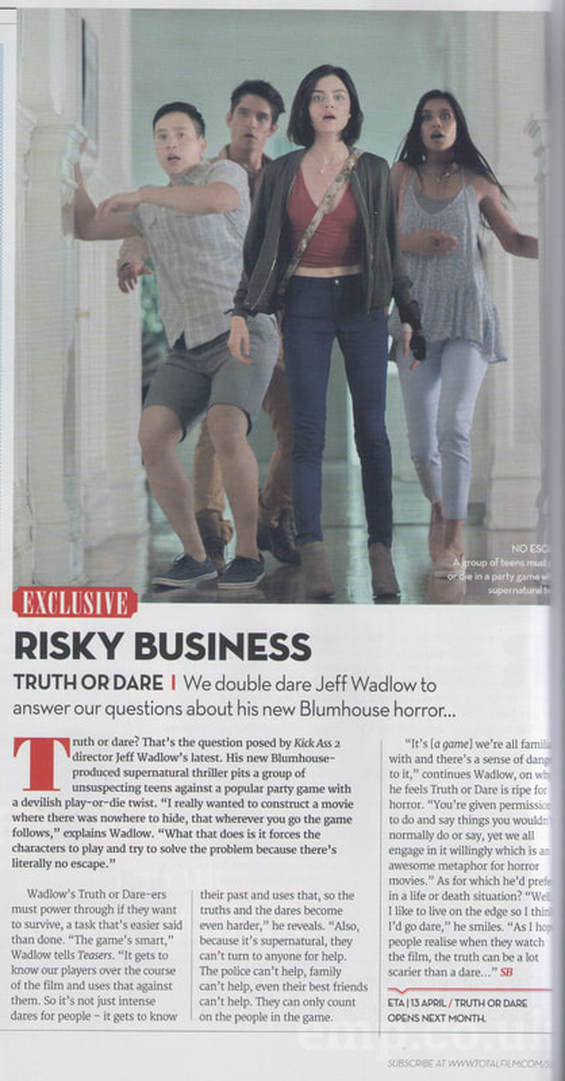 As you might imagine, Stewart Lee has seen lots of films. Probably more than you. But that's okay - he's more than willing to share a few recommendations. I felt like I had to stay on my toes whilst conducting Lee's My Movie Life interview as I could tell I was speaking to someone with considerable film knowledge. Thankfully, I'd seen most of his picks which certainly helped. 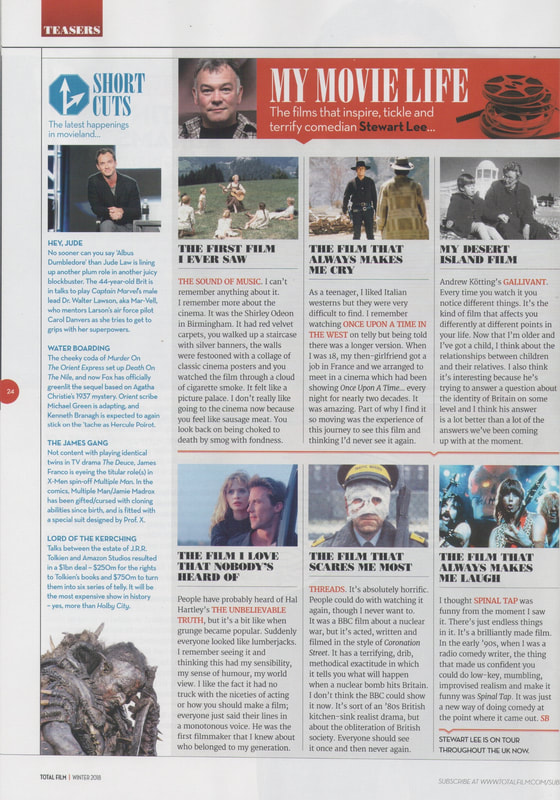 The Post marks the first time Meryl Streep, Steven Spielberg and Tom Hanks have teamed up on screen and it rightfully turned heads, with their real-life story of the Pentagon Papers looking set to storm awards season. I was lucky enough to speak to Spielberg's long-time Producing partners Amy Pascal and Kristie Macasco in what was probably the most Hollywood conference interview I've ever done. It was fun and the finished piece was a Total Film exclusive. Win win. 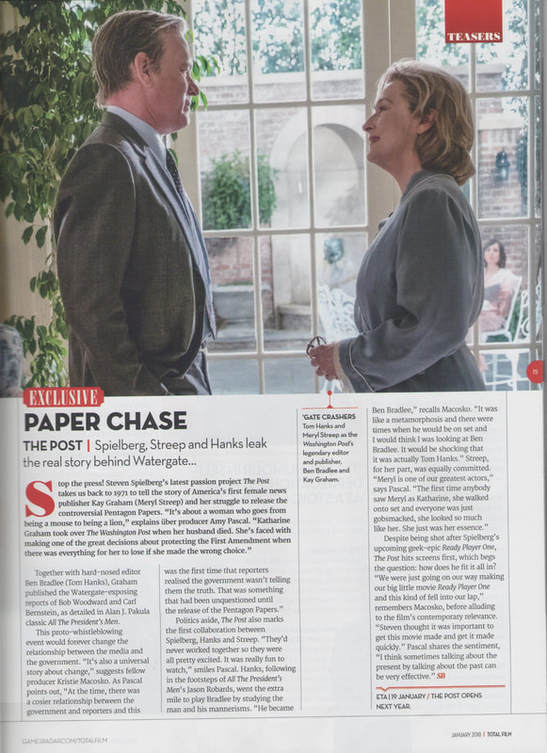 Bloody hell, it's that Ron Weasley from them Wizard films. Actually, it's Rupert Grint and I got to speak to him while he was prepping for the release of his ace new spin-off series Snatch, which - as a bit of a Potter fan - was pretty exciting. Grint was just as down-to-Earth as you'd imagine and more than up for reflecting on his days at Hogwarts. Turns out he's a Secret RuPaul's Drag Race fan. Who'd have guessed, eh? 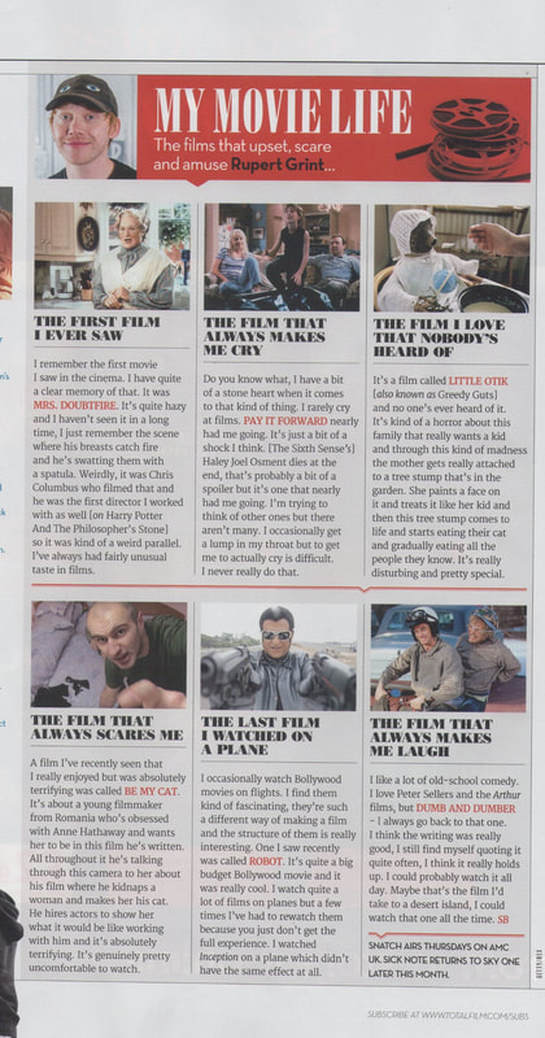 I've been writing news articles for Total Film since around 2009 but this retrospective chat with Kevin Smith on 1997's indie-hit Chasing Amy marked my first fully fledged feature. It was a pretty big deal for me, not least of all because it allowed me to speak with Smith, a director whose work (both onscreen and off) I've watched since high school. The finished piece clocked in at just under 1000 words and what you saw in print constituted probably less than 5% of my overall interview with him. Hopefully the rest will see the light of day at some point in the future. 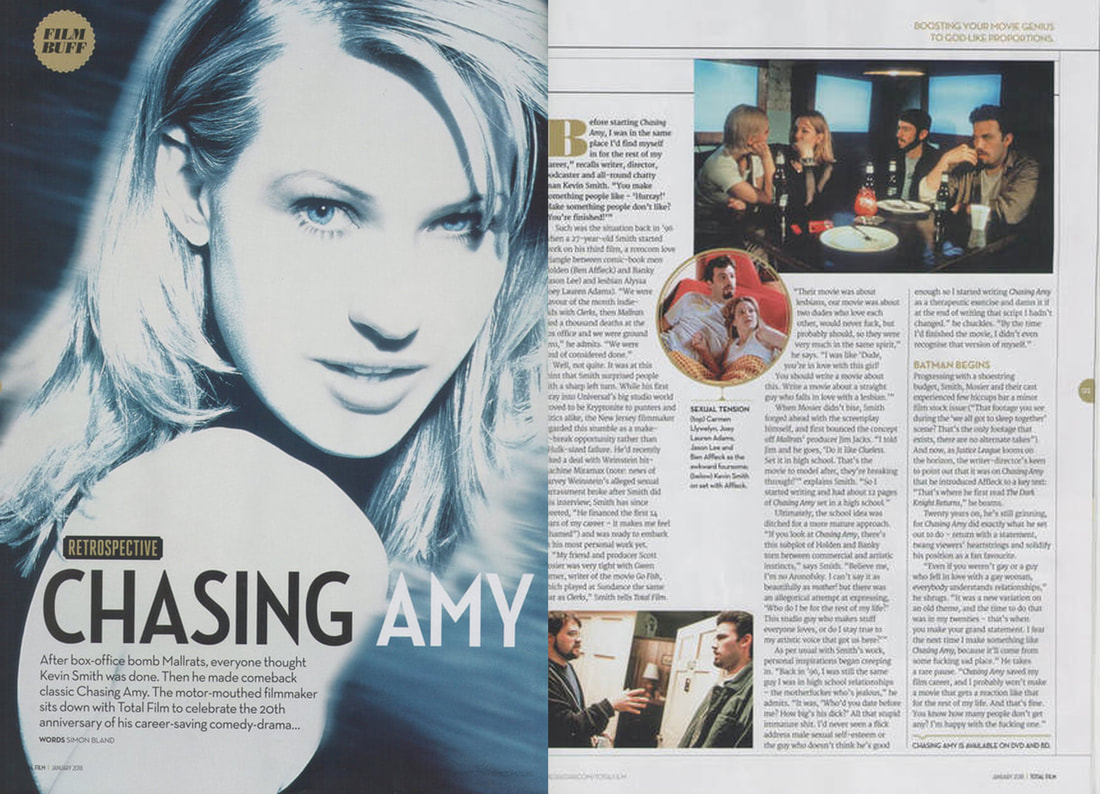 Denzel Washington transformed himself into an ageing activist for the awards bait character drama Roman Israel Esq. To find out more about how a powerhouse like Denzel prepares for such a transformative role, I spoke to Nightcrawler director and really nice guy Dan Gilroy for this 'First Look' feature. 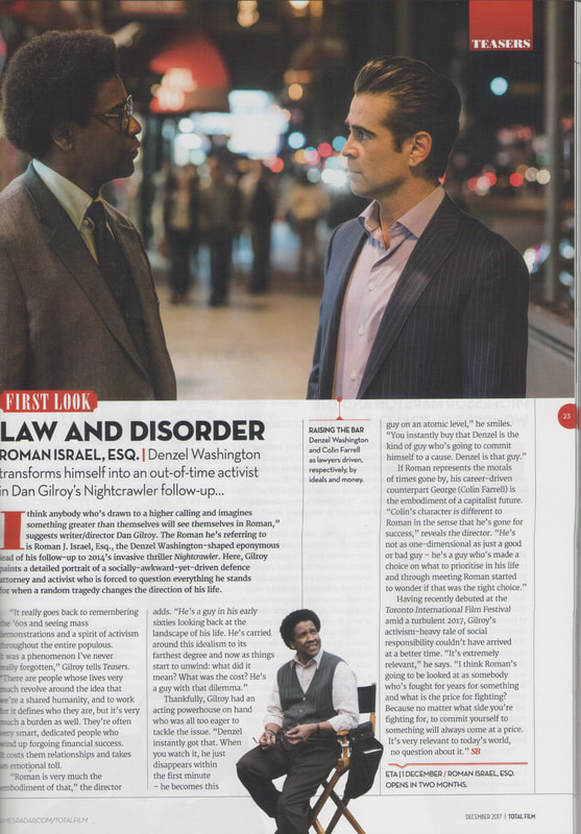 We all know that Patton Oswalt is one of America's funniest stand-up comedians but he's also a proper smart film buff. I had a conversation with him about movies - specifically the ones that have had the biggest impact on him throughout his life - and tried to keep up. 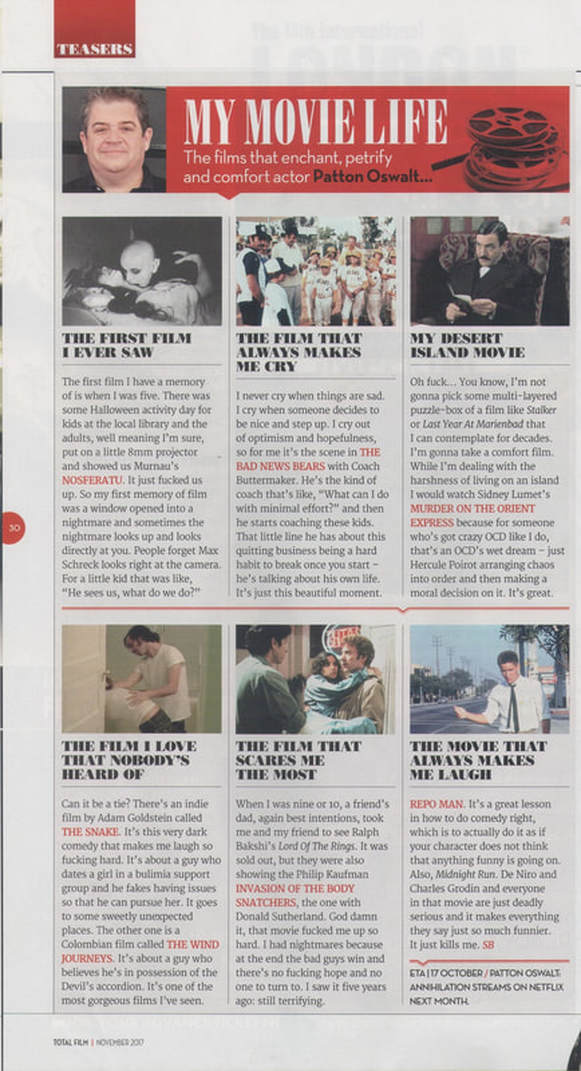 Comedian Richard Herring is known for asking celebrity guests Emergency Questions. Like, 'What's the best thing you've ever found in the embers of a bonfire?', 'Have you ever seen a bigfoot?' and 'If you had to, which popular chocolate bar would you most like to insert into your anus?'. I didn't ask him any of these questions but I did get to quiz him on his favourite movies. Surprisingly, Shrek doesn't appear once. 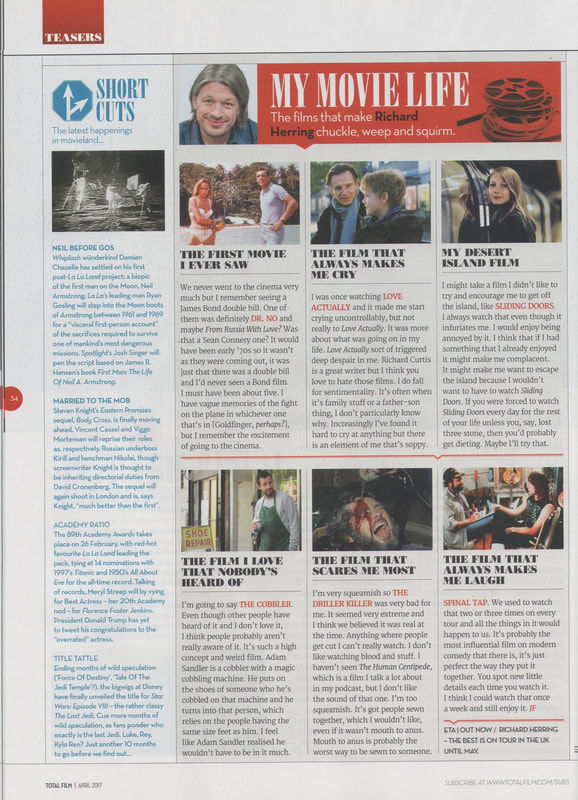 District 9 Director and science fiction powerhouse Neill Blomkamp is doing something interesting. He's taken things into his own hands and launched Oats Studios, a Vancouver-based production house specialising in sci-fi and oddball shorts, each laden with state-of-the art visual effects. Blomkamp has big plans for the grassroots project; releasing films in volumes on Youtube and ultimately hoping fans will get involved and fund future films. The whole thing is really cool and includes more compelling science fiction ideas in five minutes than most features manage in two hours. 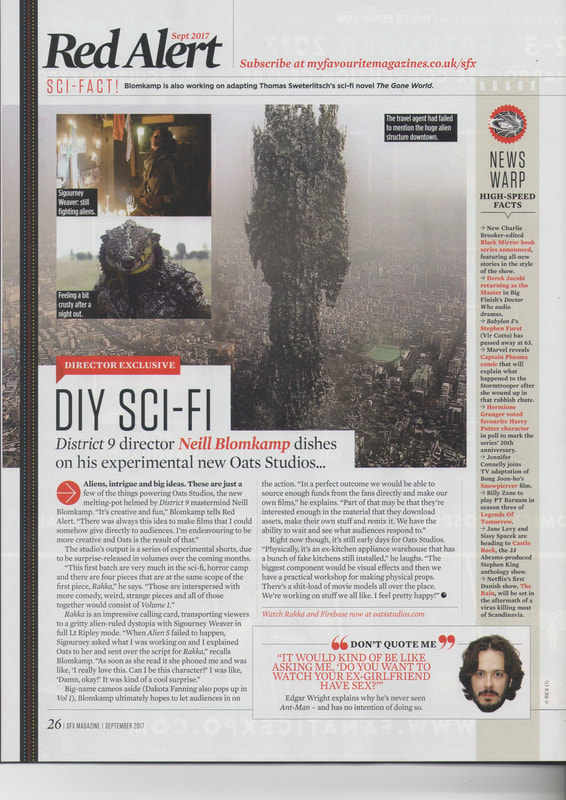 I spoke to Pee Wee Herman's best friend Joe Manganiello shortly before the release of Smurfs: The Lost Village, the animated sequel to which he lent his voice. Hefty Smurf may be the toughest bloke in Smurf Village but what I was really interested in was his role as villain Deathstroke in DC's upcoming stand alone Dark Knight film, The Batman with Ben Affleck. I tried to get as much information as I could out of him about the project but with the film's recent shuffles, there's no telling whether he'll still appear at all... 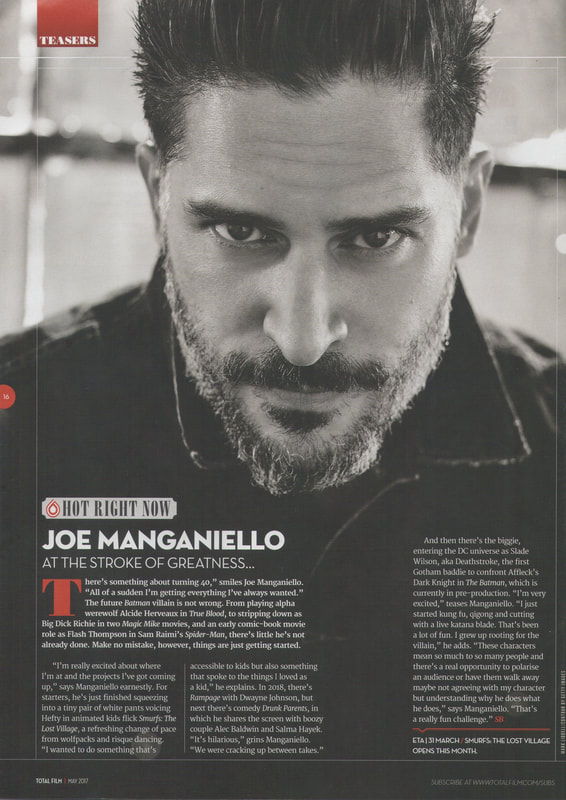 I spoke to Hannibal star Mads Mikkelsen in the lead up to the home release of Rogue One: A Star Wars Story to find out what he's like when he's not in front of the camera. Does he have any on-set superstitions? What's does he eat between scenes? Find out below... 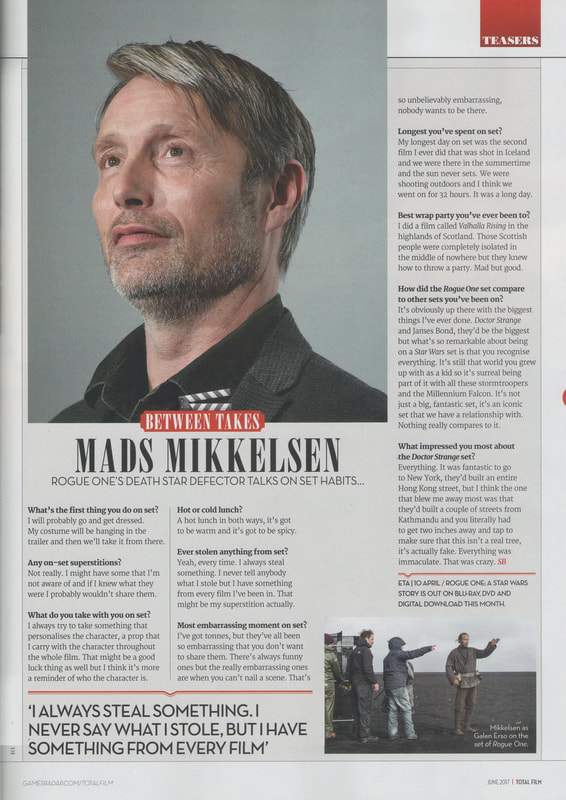 Jon Ronson was about to embark on his Psychopath Tour when I caught up with him on his way to a New York airport to discuss his favourite movies. For a person who likes to inspect character traits, it was interesting to hear about the films influenced his life and career. Read the full chat below... 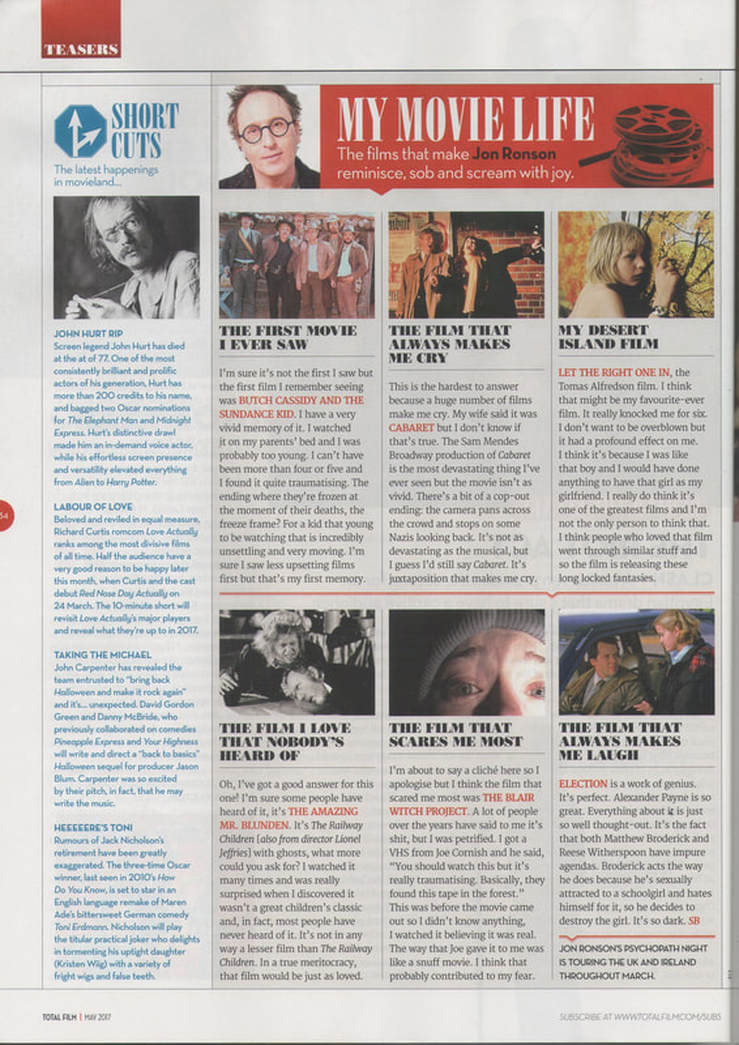 Well this was a big one. I pitched the idea of interviewing Christopher Lloyd in the lead up to the release of his new indie-horror I Am Not A Serial Killer. With so many credits under his belt, I felt that  'The Hero' feature would suit this screen ledgend perfectly. After shooting off a few emails, I eventually managed to track down some interview time and had a great chat with Doc Brown himself. 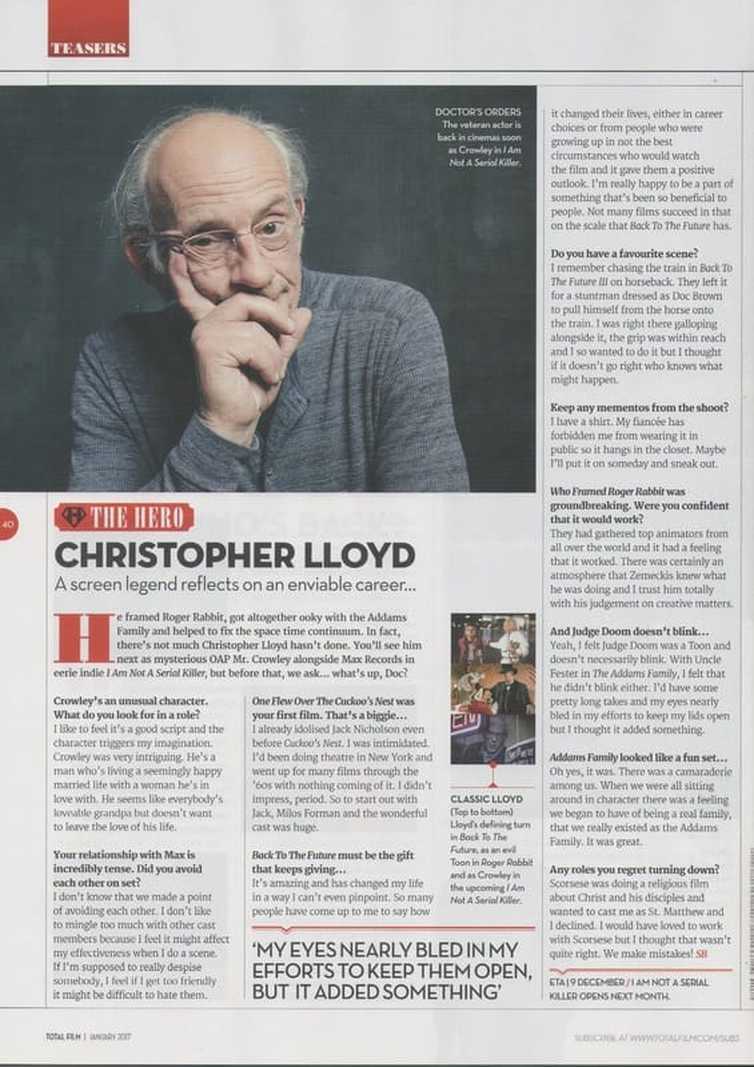 The films of Taika Waititi keep getting better and better. His follow up to the ace vampire mock-doc What We Do In The Shadows saw him tackle an adaptation of Barry Crump's roughin' it comedy Wild Pork and Watercress, ultimately titled Hunt For The Wilderpeople. I got the opportunity to speak to Taika shortly after the film's April release while he was neck-deep in the Marvel universe shooting his Thor-threequel, Thor Ragnarok. If you don't know his work, you're missing out. 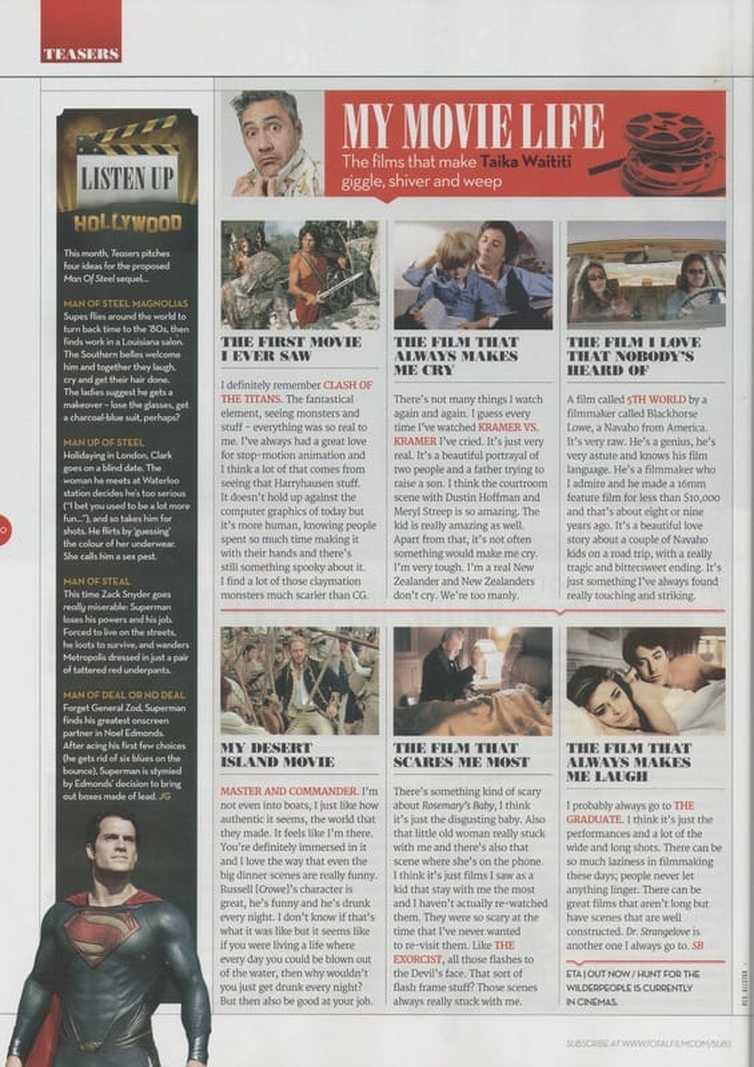 Actor, writer, musician, comedian - Matt Berry is a quadruple threat and a nice bloke to boot. With his psychedelic folk-pop band The Maypoles due to embark on a UK tour, I spoke to Steven Toast's better half about his favourite movies from childhood and beyond. The finished Q&A was featured in issue 250 but you can read the piece in full below... 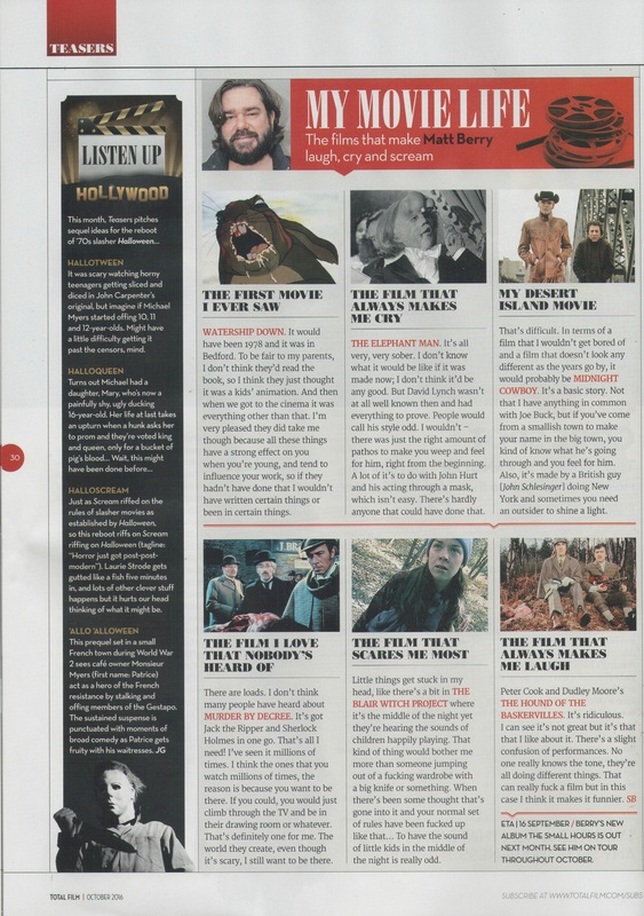 Actor and comedian David Cross visited the UK in June 2016 as part of his Making America Great Again global stand-up tour. I pitched the idea of featuring him in Total Film's My Movie Life section and managed to track down some interview time before his tour started. This feature invites interviewees to discuss their favourite movies from a range of topics and points in their lives. Who knew Cross was such a cinephile? 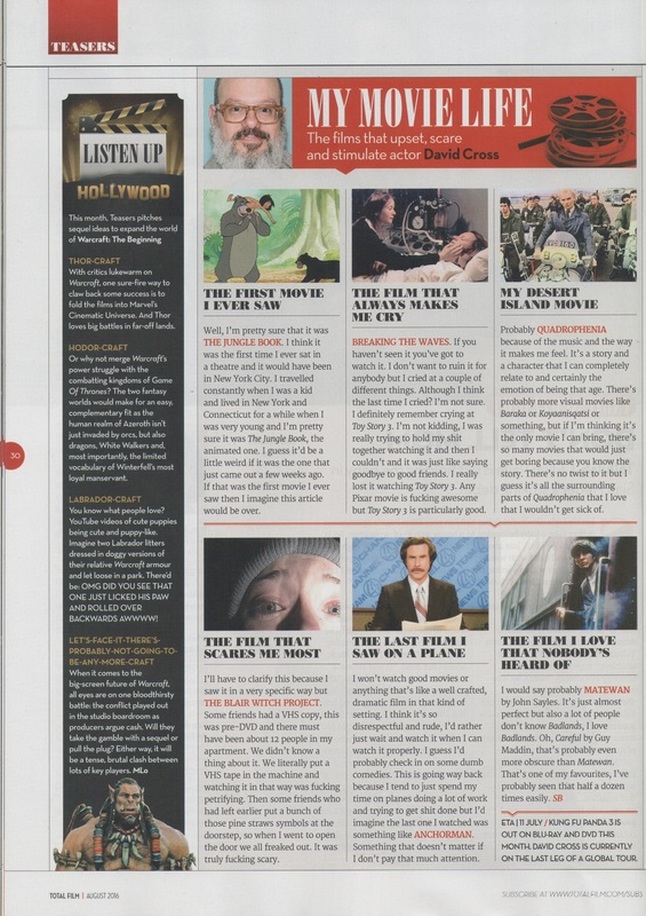 You Talkin' to me? Colin Hanks

I got the opportunity to speak to actor Colin Hanks for one of Total Film's regular features, You Talkin' To Me in the lead up to the release of his Tower Records doc, All Things Must Pass. This article relies on movie quotes instead of questions and can sink or swim depending on the interviewee's willingness to go with something a little different. Thankfully, Colin was more than up for a bit of a laugh which was good, considering my last question was inviting him to get naked and start the revolution. 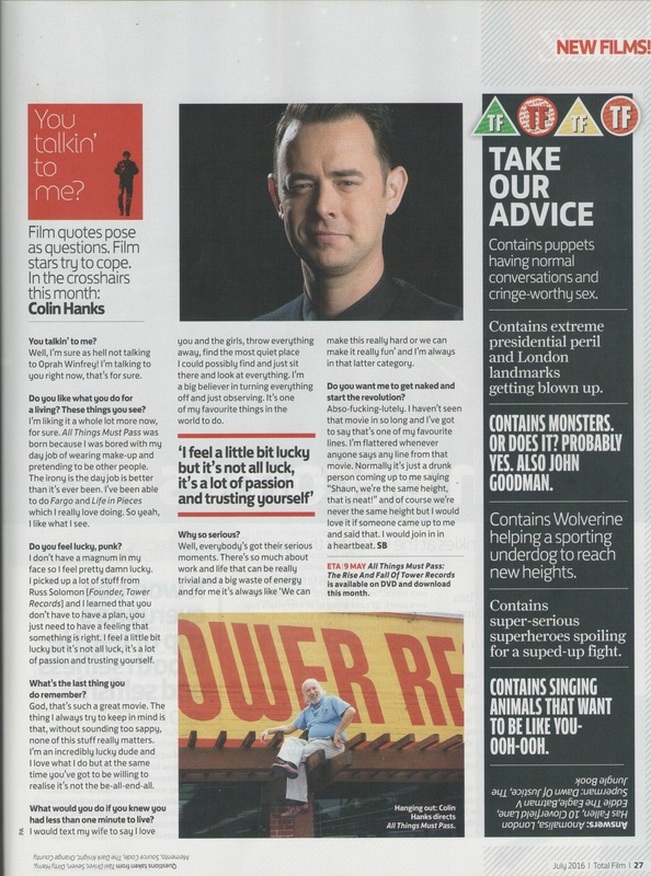 I always try to keep an eye out for upcoming films that cause a lot of noise online but don’t seem to get much movie mag attention. The David Fincher-produced adaptation of Eric Powell’s cult comic 'The Goon' fit the bill perfectly.

In around 2011, California's Blur Studios put together a smart looking teaser trailer that was doing the rounds on the internet. Drenched in cool, the short demo reel perfectly captured the dark tone and humour of Powell’s shady series and featured the vocal talents of Paul Giamatti and Clancy Brown. If you haven’t already seen it, do yourself a favor and check out the sizzle-reel below:
I managed to get author Eric Powell on the phone for a quick chat. He couldn’t have been nicer and during our interview revealed how 'The Goon' grabbed the attention of director David Fincher and what we can expect from the finished project. At the time of writing, 'The Goon' is currently still in development. 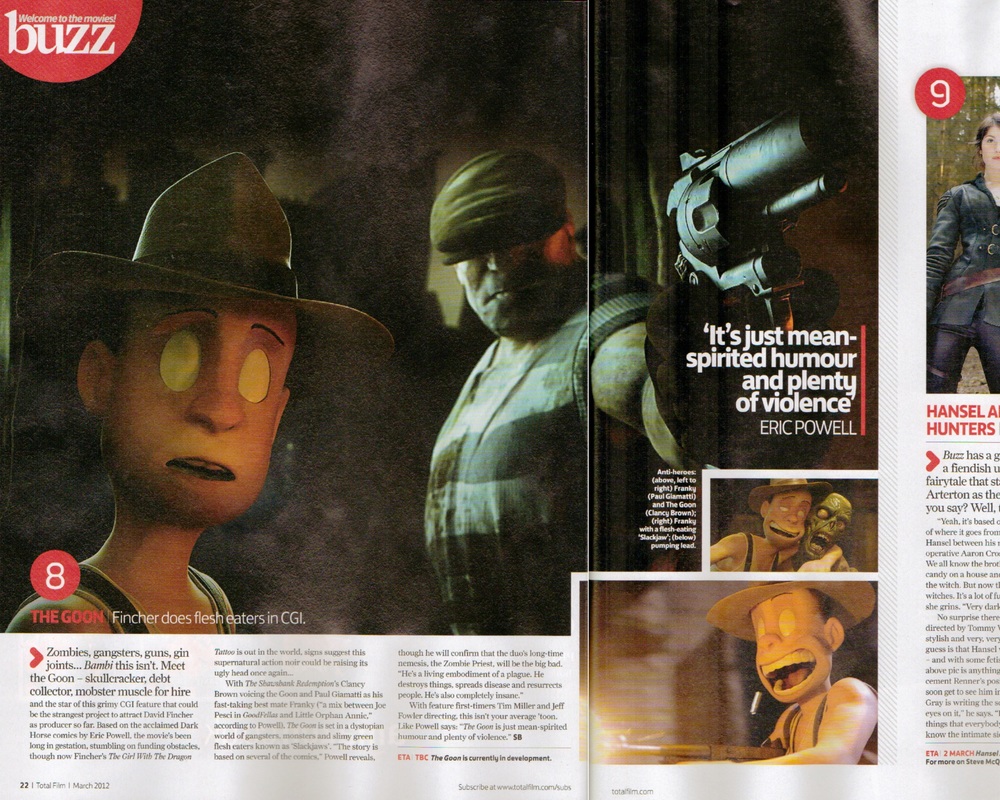 When I first started writing for Total Film I worked on a few small articles like this one featured below.

Back in 2009, I put together a 300-word news story about the slacker indie 'Hesher', staring Joseph Gordon-Levitt and Natalie Portman. The film was directed by newcomer Spenser Susser and turned heads at that year's Sundance Film Festival. 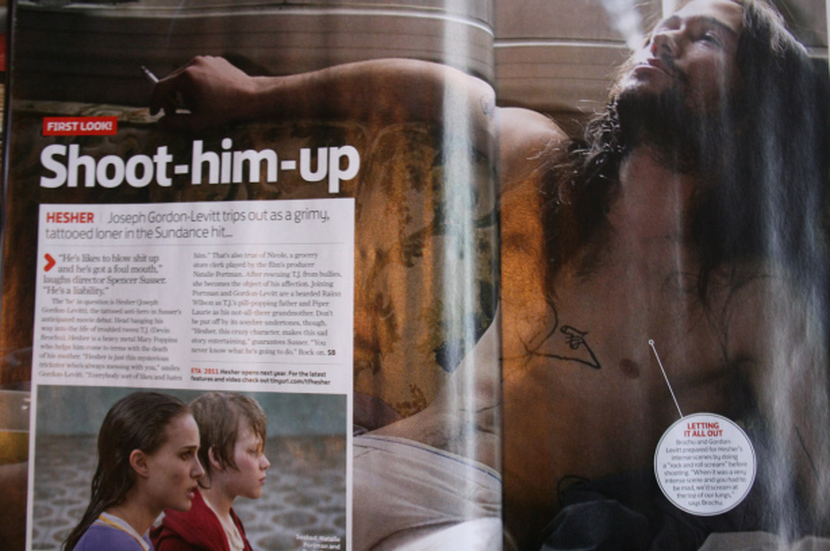 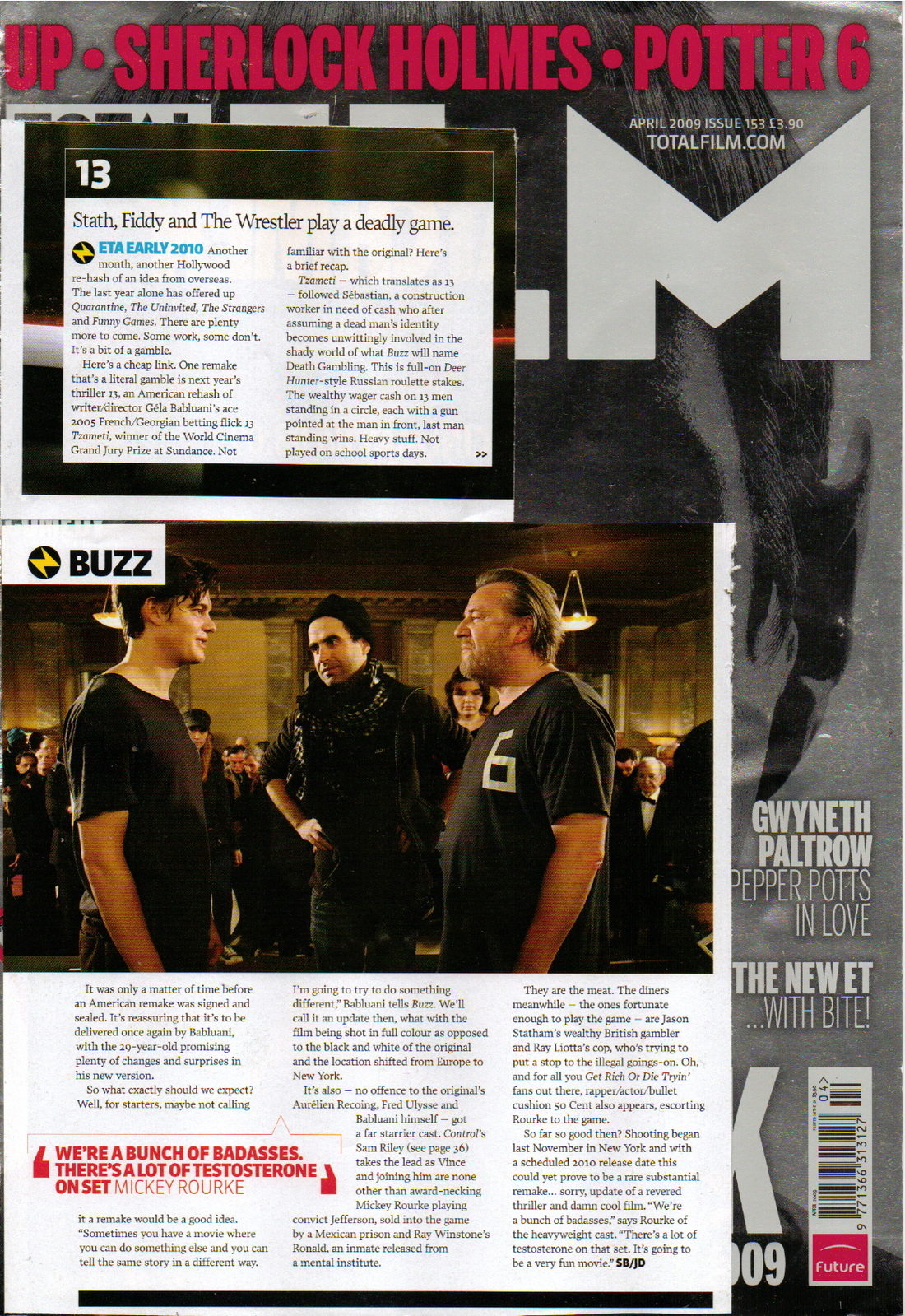